Was This Video Recently Taken in Ganga River, India?

As India reports a piling pressure on hospitals struggling with a rise in COVID-19 cases, information keeps surfacing on the internet showing how bad the situation is getting. This tweet, in particular, claims to show a video of dead bodies floating on the Ganga River.

How Many More Dead Bodies In Ganga Before Vishwa Guru Modi Ji Will Accept Covid Handling Was Not Right?

A reply to this tweet, claiming this video was taken in 2015, created suspicion and this prompted Piga Firimbi to run a check.

Congress IT cell is circulating 2015 pics of corpses in River as 2021 pics of pandemic D€aths. https://t.co/u9PayEC2y4

The Ganga river is considered holy and is personified as the ‘Mother of Humanity’ in Hinduism. As the population surrounding it keeps growing, the river faces a great threat of pollution from human and industrial effluents released into it.

In the past two weeks, at least 96 bodies have been found floating in the Ganga river. It is alleged that these bodies are of COVID-19 victims, but this is yet to be confirmed as the government took DNA and COVID samples for testing.  Similarly, reports were made of bodies buried in the sand by the river, in Uttar Pradesh’s Unnao district.

NOTE: Some of the images from this video can be disturbing to some of our readers.

First, we broke down this video into keyframes for a detailed reverse image search.

BBC Urdu on May 11, 2021, featured cuts from this same video in a news report. At timecode 00:19 this stray dog, halfway immersed in water, can be spotted in both videos. The one being checked here and that featured by BBC. (See screengrab below).

At timecode 00:45, this body floating on the river can also be spotted in this video in question. (See screengrab below).

The third cut at timecode 00:58 shows garbage and a body lying by the bank of this river. (See screengrab below).

The fourth cut at timecode 2:00 shows additional bodies floating on the river. (See screengrab below).

In a second reverse image search, 247 News featured a screenshot from this video. (See below). These images are blurred by these sites considering the graphic content they contain. 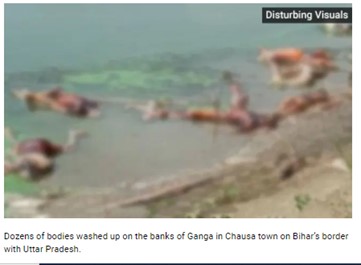 In this article, dated May 12, 2021, dozens of bodies were washed up the bank of Ganga in Chausa town on Bihar’s border with Uttar Pradesh. In a public statement, Bihar Water Resources Development Minister confirmed that 71 bodies were retrieved from the river and the necessary rites performed. However, he denied claims that these bodies were from Bihar district. He argued that most of these bodies were found in the bordering areas of Bihar. Nets were set up in the river, at the border of Uttar Pradesh and Bihar to stop any similar incident from happening again.

Similarly, The Wire Hindi on May 17, 2021, featured an image identified in this video. In this article, The Namami Gange Mission had reported cases of partly burnt and mutilated bodies flowing in the river and its tributaries. It is believed that these bodies were dumped into Ganga by families who could not afford wood to cremate these bodies.

Claims showing a video of bodies recently identified on different parts of the Ganga River in India are TRUE.