Is IEBC Giving Voters Sh4,700 Through This Site as Alleged? 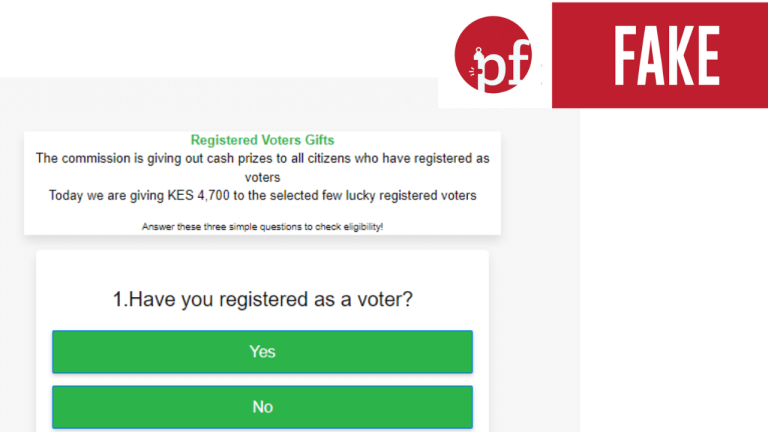 This link making rounds on WhatsApp claims to be offering cash prizes worth Ksh4,700 to citizens who have registered to vote. The link leads to a website purporting to have come from the Independent Electoral and Boundaries Commission (IEBC).

IEBC re-opened the voter registration process on February 8, 2022. This is set to run until February 28, 2022 in preparation for the August 9, 2022 general elections. The commission’s budget for this election was capped at Sh86 million, as they target 4.5 million new voters in the ongoing registration process.

The said initiative to supposedly gift those who have registered to vote is not mentioned on IEBC’s official communication platforms. This includes their Twitter and Facebook accounts, as well as the IEBC website where the commission routinely publishes information about their programs.

Piga Firimbi also found that the link circulating was recently registered on January 28, 2022. An indicator that it could have been created for the sole purpose of promoting the alleged cash awards from IEBC. Upon searching the link on the WhoIs tool, details such as the country of registration and registrant details of the website are hidden. Such is uncharacteristic of legitimate websites, especially one purporting to come from a government agency.

The application process required for one to redeem the promised Ksh4,700 award further contains typical characteristics of a hoax. After selecting whether one is a registered voter, the next step is to select whether they would be participating in the upcoming elections. This is followed by a request to fill in personally identifiable information such as phone numbers and email addresses, which is a typical trait in phishing scams. The last step would then require applicants to share the link to five WhatsApp groups or 20 contacts after which they would supposedly “immediately” receive the promised Ksh4,700 award. This final step is typical of an Engagement Bait Scam.

Claims that IEBC is gifting voters Ksh4,700 are FALSE.