Did Some Hindus Throw Away Their Gods for Failing to Save Them From Coronavirus? 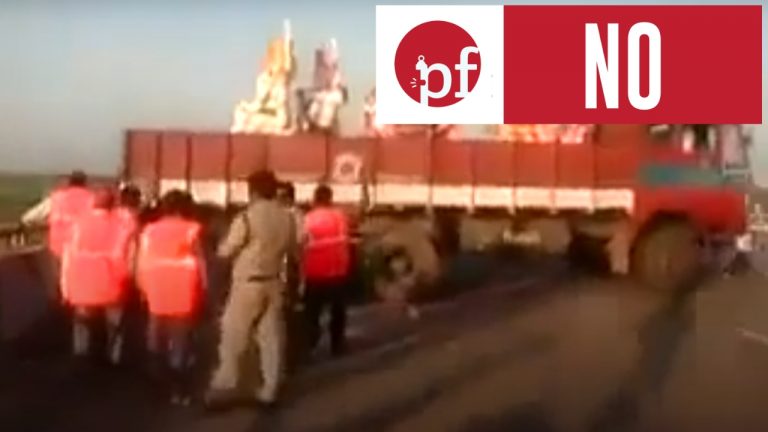 The video below has been circulating on social media, with claims that some Hindus threw away their gods for failing to save them from coronavirus.

The clip shows a group of men climbing into a truck containing large statues, which they toss into the river one by one.

The Indians throwing away their gods in the River for not being able to save them from Covid-19. Now they are ready to accept Jesus as their Lord and savior. Hallelujah… The church is marching on

Hinduism is considered by many scholars to be the world’s oldest religion, with roots dating back over 4000 years. It is ranked as the third-largest religion globally after Christianity and Islam. Hindu worship takes place in temples and makes use of many sacred writings as opposed to one holy book.

Hinduism is sometimes referred to as a way of life as opposed to a single organized religion, as it embraces many religious ideas.

Most Hindus worship a single deity known as Brahman but still recognize other gods and goddesses such as Shiva, Krishna, Saraswati and Ganesha.

A frame-by-frame analysis of the video followed by reverse searches traces the video back to 2015.

The footage appears in sections of this YouTube video dated October 3, 2015.

Another upload of the video on YouTube is dated December 18, 2015, with the caption:

Hindus throwing there [sic] God in riverfront of Indian Police

Further interrogation of the keywords “Hindus throwing gods in water” reveals a practice known as Ganesh Chaturthi, which is an annual Hindu festival to honour their idol, Ganesha, the god of wisdom and knowledge. The god, which is yellow in colour, has an elephant head, four hands and is made of clay sculptures of various sizes. The idols in the video, appear to fit this description.

The festival is held in the month of Bhadrabada in the Hindu calendar and celebrations continue for 10 days, ending with dipping the statues and throwing them in the water. This is the part shown in the video in circulation. This year the festival will be held between August 23 and September 22.

The immersion of statues in lakes and rivers has however been reported as a major source of pollution in India. Although these statues are made of clay and gypsum that decomposes in water over time, the paint and decorations in the statues contaminate the water.

The video circulating online is old and has nothing to do with the ongoing pandemic, making the claim FALSE.