Is This a COVID-19 Vaccine Specifically Made for Africans?

Images showing a medicine pack with the titles Cipremi and Cipla have made rounds on social media and said to be a COVID-19 vaccine allegedly made for Africans.

The images show one side of the pack with the inscription: ‘Not for distribution in US, Canada or EU’, while a second image shows another side of the pack written: “For use in below countries only”, followed by a list of Sub-Saharan African countries.

Nigerian politicians, Dino Melaye and Fani-Kayode shared the images on their Facebook pages, raising concern over why the medicine’s instructions single out African countries. 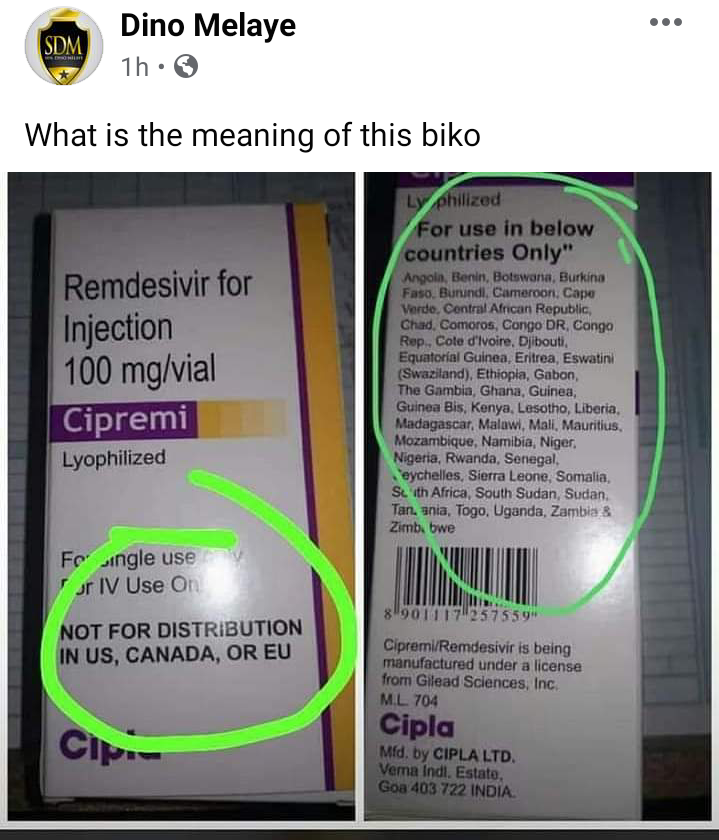 At the same time, a tweet claims that the medicine is allegedly “targeted on wiping out majority of Africans”, while a Facebook user claimed that the medicine has been produced because “they [the western world apparently] decided to push COVID-19 to Africa”.

Inscriptions on the images circulating online do not indicate that the Cipremi medicine is a COVID-19 vaccine. Writing on the pack states that the medicine is a “Remdesivir for injection”.

According to the Gilead Sciences Inc. website, remdesivir is an antiviral drug used when treating COVID-19 to help in stopping the replication of the virus. Gilead is the original manufacturer for the remdesivir drug, which was previously developed to fight Ebola as well as other strains of the Coronavirus.

Responding to a concern on Twitter, Cipla, a pharmaceutical company that also manufactures remdesivir stated that the medicine whose images are circulating is not a COVID-19 vaccine. This tweet also contained a link to the licensing agreement that caused African countries to be singled out in the Cipremi remdesivir medicine.

Hi, Remdesivir, used in the management of severe COVID-19 disease, is not a COVID-19 vaccine. The label restriction indicates territories not licensed to Cipla for supply. For more details about the license agreement, please visit https://t.co/HfT5Vp30Ag

The licensing agreement indicates that Gilead company entered an agreement with 9 other pharmaceutical companies based in Egypt, India and Pakistan to manufacture the drug for distribution in 127 countries.

“The regulatory approval status of Remdesivir varies by country,” the licensing agreement states, “and the distribution is subject to local laws and regulations”.

The Indian-based company Cipla, for instance, which is listed among the 9 manufactures of remdesivir, produces the antiviral drug under the brand name Cipremi and specifically distributes it to the countries listed on its pack, which all happen to be African. In the same way, Hetero Labs Ltd company which is another Indian manufacturer listed on the Gilead licensing agreement produces remdesivir under the name COVIFOR, whose package includes the instruction: “For use in India only”. Remidia is another form of remdesivir meant for use in Pakistan only and manufactured by Pakistan’s Ferozsons Laboratories Ltd which is also listed in the Gilead agreement.

Contrary to claims that the Remdesivir is not administered to people in America, Canada and Europe, Piga Firimbi found that the drug is known by the name Veklury in the three regions. A statement issued by the European Medicines Agency indicates that the EU on July 3, 2020 had authorised the use of Remdesivir for the treatment of COVID-19 for people who are 12-years of age and above. A statement from the government of Canada also shows that the use of Veklury (Remdesivir) was authorised in the country in July 2020. The United States’ Food and Drug Administration also approved the use of the antiviral drug in treating COVID-19, with conditions, according to a statement published on the Gilead website.

Claims that the Cipremi Remdesivir medicine is a COVID-19 vaccine specifically made for Africans are FALSE.